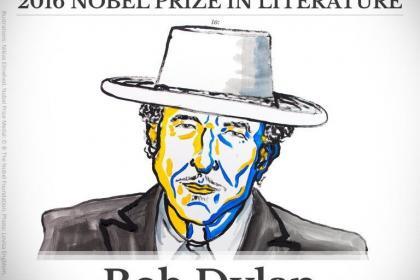 Surprise was the most common reaction when the 1913 and 2016 Nobel Prizes were awarded for literature. In 1913, a virtual unknown outside India, and in 2016, a world-famous celebrated songwriter, elicited the same reaction. Why?

Rabindranath Tagore was recognized for his first work translated in English: a songbook aptly titled “Geetanjali.” Then in 2016, Bob Dylan was himself surprised when he was awarded the Nobel Prize for Literature.

Coincidentally, the Nobel Committee’s selection — which was both praised and criticized — for the literature laureate in 2016 came just over a century after Tagore became the first laureate recognized for verse meant to accompany music. Tagore was the first non-western Nobel laureate; he did not expect to win even though he was already a recognized and beloved poet in his native land.

Anthems for Movements and Nations

What both Tagore and Dylan have in common is how they have moved people in their eras and afterwards. Dylan’s lyrics have been the figurative anthems for the civil rights and anti-war movements in the United States; Tagore’s poetry provided the lyrics for three national anthems.

Because the Nobel was established by an armament manufacturer, writer Will Self, while agreeing about the literary value of Dylan’s work, suggested that he should follow Jean Paul Sartre’s example and reject his award.

Both Laureates Were Surprised for Different Reasons

Dylan did not know that he was being considered for the prize, but Tagore had been informed by a friend that Thomas Sturge Moore had recommended him to the Nobel Committee. Even though “Geetanjali” was a book of lyrics, Moore felt its poetry merited consideration of Tagore as a literary genius worthy of recognition.

Tagore was already known at home for being a literary great. Dylan is also being presented in literature classes taught by his fans as a literary talent. Dylan’s biographers, Dr. David Gaines and Howard Sounes, agree that he was a worthy choice.

Tagore, a poet, consciously wrote lyrics. But in Dylan’s case, he was not consciously writing poetry, even though in his lyrics he has evoked literary masters.

Unlike Tagore, Bob Dylan was not recognized for a particular work but for a body of work. In a career spanning more than 50 years, Dylan has crafted more than 700 songs. Tagore, who lived to a ripe old age, composed more than 2000 songs. So, Dylan has a ways to go before his productivity exceeds that of the lyricist who preceded him into the annals of Nobel laureates.