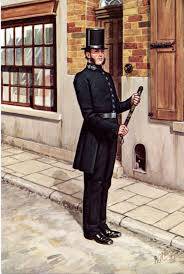 Until 1829, crime prevention in London was the responsibility of a cadre of men working for magistrates’ courts, parishes, or local divisions. In response to increasing crime and unrest, a parliamentary committee in 1812 recommended putting a unified force throughout the capital, although the Metropolitan Police wasn’t formed until 1829.

Before the Metropolitan Police came the Bow Street Runners, who served the magistrate at Bow Street, Henry Fielding and then his half-brother, John. The Runners pioneered systemic crime investigations through information-gathering. The Runners also had horseback and pedestrian patrols.

By the 1820s, their reputation suffered because of association with unsavory people to retrieve stolen property. They were disbanded 10 years after the police force was established in 1829.

The new force wore blue uniforms to distinguish themselves from the red uniform of the army. Initially its role was crime prevention, until a long delay in finding a murderer led to the creation of a department of crime-solving detectives. Scotland Yard became shorthand for detectives, but it was actually the address of the police force headquarters.

Charles Dickens created the detective character Mr. Bucket in his novel, “Bleak House.” He was modeled after a real person. The character was a hit with readers, so more stories with detectives emerged from other writers.

Wilkie Collins’ “The Moonstone” was published in 1868, preceded in 1862 by “Ruth the Betrayer” with the female detective Ruth Trail working in a Secret Intelligence Office established by a former police officer.

Another female detective appeared later in “Revelations of a Female Detective” by Andrew Forrester. In “The Boy Detective,” Ernest Keen emerged in the penny-dreadfuls.

In 1840s, the First Detectives in America Emerged in Boston

Boston detectives were modeled on what had been introduced in London, but the Boston police department was established later, in 1854.

In America, the first crime fiction was “The Murders in the Rue Morgue” by Edgar Allan Poe, published in 1841. In 1855, Emile Gaboriau’s crime novel, “L’Affair Lerouge” was published and became very popular. The first American-based story, “The Leavenworth Case” by Anna Katherine Green was published in 1878. Her book was preceded by the translated French book, “The Widow Lerouge” in 1878.